A wartime letter written by a Japanese national has confirmed that Japan had "forced" Korean women to become sex slaves for the Japanese army during World War II, in a rare documentary evidence that could prove Tokyo's culpability for its wartime atrocities, according to the letter released by China on Monday.

Historians say up to 200,000 women from Korea, China and some Asian nations were coerced into sexual servitude at front-line Japanese brothels during the war. Those sex slaves were euphemistically called "comfort women."

According to one of the Japanese-language letters revealed by China's Jilin Provincial Archives to some South Korean media organizations, Japan's government "forced" Korean women to serve as sex slaves for Japanese soldiers who were stationed in northern China. 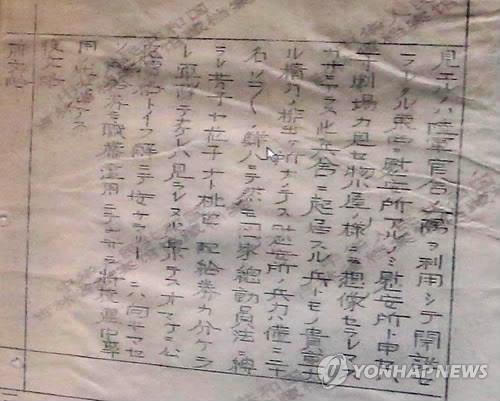 The letter, written by a Japanese citizen named Nakata who lived in Heilongjiang province of China in 1941, said, "Under the National Mobilization Law, some 20 Korean women were forced to serve at a comfort station in the Japanese army compound." It was referring to the Japanese law legislated in 1938 to put Japan's economy on wartime footing after the start of the Second Sino-Japanese War.

The letter was not sent because it was censored by the Japanese army's "Monthly Postal Review Report." It has been preserved at the Jilin archives administration, which keeps 100,000 pieces of Japan's wartime documents and analyzes them.

Zhao Yujie, a researcher at the Jilin archives administration, noted that it was a rare evidence that Japan mobilized Korean women as sex slaves under the 1938 law.

"It can be recognized that the Korean women were forcefully mobilized as comfort women by the Japanese law," Zhao said. "Also, the term of 'forced mobilization' was shown in the letter."

China's foreign ministry took journalists of some South Korean news organizations, including Yonhap News Agency, to the Jilin archive administration and revealed 25 pieces of the documents, including the letter.

One of the documents written by the Japanese military police in Nanjing during the war showed that it operated a military brothel called "comfort station" in Wuhu, a county of Anhui province.

The Japanese document described 36 Korean women at the military brothel as "special comfort women," strongly indicating that they were coerced into sexual servitude.

Yin Huai, head of the Jilin archives administration, told reporters that China hopes to work together with South Korea to discover more evidence of wartime crimes committed by the Japanese army during the war.

"Korea is a close neighbor of China and shared sufferings during the war," Yin said. "We want to share this finding with relevant Korean sides and develop this research further."